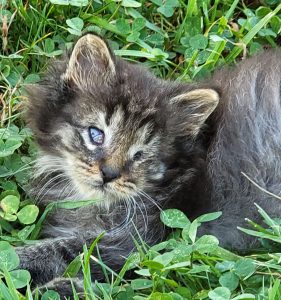 Stevie was found with bad infections in both eyes, leaving him blind.

Stevie’s story is one of resilience when the odds were stacked against his favor. A good Samaritan found Stevie as a stray kitten, all by himself, at only a few weeks old. Not knowing how to care for a kitten that young, the good Samaritan brought him to our shelter. Staff knew upon arrival that the odds were not in Stevie’s favor and that his mother probably abandoned him. Most mother animals abandon their young when they can sense they have been with special needs, and do not have a high chance of survival, which refers to the term “survival of the fittest”. Stevie arrived blind, with two severe eye infections that likely would not resolve with basic antibiotics. Being at the shelter, exposed to other diseases, would only risk his health further, so staff determined Stevie needed a foster. And so his story begins:

“I saw a post on FAPL’s Foster Page on August 31st, 2022 that a foster was needed for one blind kitten. I thought “Great!” One kitten compared to the five bottle

babies I had recently finished fostering. “This will be easy!” And Stevie was easy in most ways except that he seemed lonely. He had bouts with intestinal parasites, which were treated by FAPL, and once he had his vaccines he was able to be with my other two 6 month old kittens, 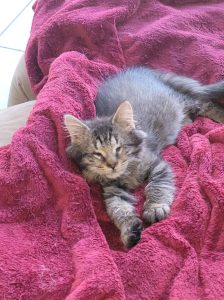 Stevie relaxing on a warm blanket at his foster, now adopters, house!

both FAPL alumni. Stevie was for the most part completely blind. His left eye is basically non-existent and the right badly damaged and cloudy.  I never asked what happened to him because it didn’t matter to me at that point, I knew he needed help. So for several weeks he and I had our daily routine of warm compresses and medicated drops, which he hated! He was switched over to an eye ointment after seeing the vet at Friendship towards the end of September. He tolerated the eye ointment much better. At that point it was highly advised that we have both of Stevie’s eyes removed due to a potential lifetime of infections. I already knew at that time that he was going to stay with us permanently. My husband grew quite fond of him, as did I of course, but Stevie seems to respond more to Jim’s voice than to mine. As time has gone on we’ve watched him grow in so many ways, not just size. I believe even now Stevie retains a tiny bit of sight and it seems just enough to navigate his surroundings. At first he would just hug walls and table legs and follow our voices. After a few weeks one of my other cats, Ghost, started behaving like a ‘service’ cat. He would veer Stevie off of incorrect courses and make sure he stayed in a trajectory to cause as little harm as possible. I’ve actually seen Ghost head Stevie off from the basement stairs, as we’ve yet to practice that technique. I knew if anybody was perfect for this kitten and his needs it was me and I already felt very committed to him. 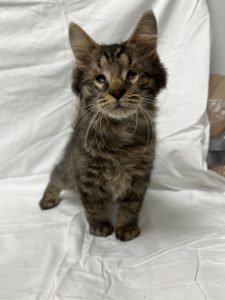 Stevie posing for a photo, so he can be the star of our December marketing campaign!

Every animal is unique, and Stevie is no different. My husband and I love to watch him experience new things, and in different ways than ‘normal’ animals. It’s funny because he doesn’t even know that he is a special needs animal and the rest of the household, two cats and two large dogs, seem to accept him for what his normal is. Our morning routine is to sit in our sunroom and have coffee and watch the great outdoors. I will open the window and let Stevie sit on the ledge so he can enjoy it as well. Since he really can’t see he uses his other senses. His ears are always twitching and his nose goes straight into the air. He takes in all the scents that waft in from the window and he knows when he hears birds, but of course doesn’t really know what they look like! Stevie seems to know which dog is which when he approaches them, they are very different dogs, and he knows how far he can go with them. The dogs sense his disability as well, since he tends to skid into them a LOT!  The dogs tolerate all the cats quite well but they also have a special place for Stevie.

Animals are truly resilient creatures and are able to move forward not even knowing they are lacking in some ways. Stevie just goes about his day like any other kitten. He plays, he sleeps, enjoys the sunshine and climbs two feet to his cage door when he’s hungry! I have to feed him in his cage as the other two are little pigs and will eat all his food otherwise. But he has his routine, and it seems to work for him. He will be seeing Dr. Knox at the end of November for vaccines, a checkup and to evaluate his eye situation. As of right now wetting drops and the occasional antibiotic ointment is keeping his eyes from getting infected.  I found that fostering kittens was extremely rewarding in itself but fostering/adopting a special needs animal is extremely enriching to the soul. Just to watch the changes and feel the love that he has for us is extraordinary.”

This truly is a heartwarming story about a blind kitten finding his fur-ever home! It also brings attention to how becoming a volunteer or a foster can get you involved with our shelter in so many different ways. Stevie’s new mom, can now volunteer, foster and adopter to her FAPL Resume!