From being abandoned outside, to living out her life in a wonderful home, there is no doubt Gina has had a rough journey to get where she is at. We are going to take you through her journey, one that is hard to fathom at times. Its difficult to imagine how a dog can be put through so much, and still be so happy. That is Gina for you. 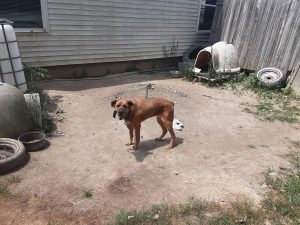 Gina was chained up outside when humane officers first found her.

Gina was in rough shape, and extremely emaciated. Our humane officers too action right away.

Her story with us at Friendship APL begins when our humane officers received a call about possible dog abandonment. When they arrived to the address they were provided, they indeed found Gina, abandoned in the backyard. It was clear she had been living outside for a while. Her ears were riddled with fly strike, which are tons of painful scabs and scars from constantly being bitten by flies. This is common with dogs forced to live outside without any shelter from the elements. Gina was also extremely emaciated. You could clearly see the outline of her ribs. Her coat was dull and patchy after being subjected to inclement Ohio weather. As if that wasn’t hard enough on Gina, she was a senior 10 year old dog, who had probably spent most of her life living this way. Our humane officers quickly determined that she needed to be seized and given medical attention immediately.

Gina came to our facility on July 12, 2022. She was nervous and scared, understandably so, but despite her fear, she was happy to soak up attention from staff. Gina was evaluated by our vet staff, vaccinated, bathed and given a nice warm bed to snuggle in. After further vet evaluation, we discovered that due to a poor diet, Gina had many infected teeth that needed removed. She also had to be fed on a very specific schedule to prevent her from eating to fast, but also allow her to gain weight in a healthy manner. Gina was also treated for a tick born bacterial infection, fleas and other parasites. Most of all, Gina was given loads of TLC by all of the caring staff and volunteers at the shelter.

Gina was a staff and volunteer favorite, and many advocated for her to find a home every week. This meant trips to the nursing home, going on walks around the shelter, participating in shelter events and anything that could generate potential adopter interest. On September 4th, an adopter walked through our doors after seeing Gina online. She specifically asked to see Gina right away and fell in love at first sight. Gina’s adopter was drawn to her gentle, affectionate personality and understood the need to give a senior dog a chance.

It’s been two weeks since Gina was adopted and we are please to share her adopter’s update! Below, you will find all of the wonderful things Gina has been up to since being adopted as well as some photos! 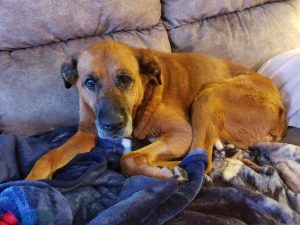 Gina will never be forced to live outside again. She is enjoying lounging on the couch! 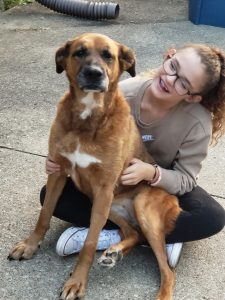 “Gina is doing so wonderful in my home! She is my absolute shadow and always stays by my side! When I first got Gina home, she was understandably nervous and shy, but never had a mean bone in her body. She had been through a lot and needed to adjust. I made sure to give her a bath right after adopting her and she was so good for that. Gina has a nice big fenced in yard to explore as she desires as well as our daily walks we take together. Gina has really opened up and loves to trott around the back and run through the yard! Gina is now called “Sunshine”, and I love to sing her the song. She is no longer emaciated and enjoys having a meal twice a day. Gina has since been to the vet and has a clean bill of health. She enjoys the neighborhood kids when they visit and also lives with a cat! Nothing gives me more joy then coming home to her little nub tail wagging and wiggling. I absolutely adore Sunshine and she has filled the void since my last dog passed.”

We as an organization would not be able to do, what we do, for animals like Gina without our army of supporters. Volunteers, donors and adopters all play a very important role in getting our animals the care they need. After receiving this care, they are then able to find wonderful homes, like Gina, now known as Sunshine!