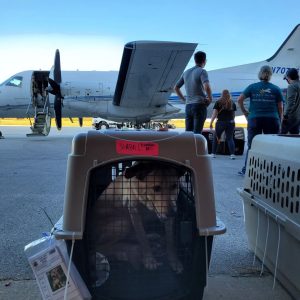 Dog and cats arrive in carriers after being flown on a private flight funded by the Bissell Pet Foundation.

The Bissell Pet Foundation created a “Transport Program” for which they work to help transport pets out of overcrowded shelters (mainly in the South), to rescue partners with adopters seeking pets (Bissell Pet Foundation 2022). In 2021, they expanded these efforts to air travel, making the transport trip much shorter and less stressful for the animals. Private planes are utilized to transport large groups of animals from shelters to one location, where partner rescues meet to take these animals back to their shelters. The “Transport Program” Bissell created has enabled Friendship APL to channel our amazing adopter community and help out other animal shelters struggling with cage space. 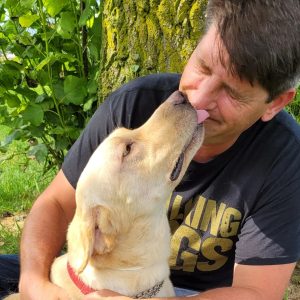 Enos, one of the seven Heartworm positive dogs, gives Director Greg Willey a wet kiss! He is now adopted and in a home.

Friendship Animal Protective League has been a partner rescue with Bissell Pet Foundation since the beginning of this year and have since participated in three air transports. The first transport we participated in involved our shelter staff driving to Buffalo, New York to bring seven dogs and nine cats back to the shelter with us. These were animals coming from the South and states such as Mississippi and Louisiana. This transport was in April, right in the midst of a Heartworm Treatment crisis. There was a national shortage of the medication needed to treat heartworm. Friendship APL had happened to order this medication in bulk prior to the shortage. Of the seven dogs that were pulled in April, seven of them were heartworm positive and Friendship APL was able to get them the treatment they needed. All seven dogs and nine cats went up for adoption and are now enjoying their new homes! In June, shelter staff embarked on their second trip to Buffalo, New York to partner with Bissell Pet Foundation and help pull seven dogs and five cats from Southern shelters. 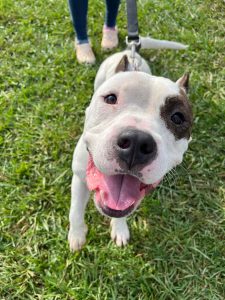 One of seven dogs from Florida, Jimmy Chew, came to our shelter to help offset the devastation local Florida animal shelters faced. He is now in a loving home.

Our most recent partnership with Bissell Pet Foundation was covered by local media/news as well as written about in local newspapers. Most people are familiar with the horrific devastation Hurricane Ian brought to Florida in October of this year. Amongst the battered homes and displayed families, were the pets of these families. Bissell Pet Foundation jumped into action and worked with local Florida shelters to help clear their shelters of dogs and cats that were taking up cage space. That way all of the displaced animals from the Hurricane have shelters to go to in Florida. In October, Friendship APL staff made their way to North Canton with other local rescues, to pull 7 dogs from the air transport. These seven dogs came from the Florida shelters and were coming to Friendship to have a chance at a new life! We are happy to report that of the seven dogs, five have gone to their new homes!

It is partnerships like the one we have with the Bissell Pet Foundation that make this hard time in animal welfare, bearable. Every one of us has the same mission and that is to rescue animals and find them homes. If we are all able to pitch in, even if that is by volunteering, adopting or donating, there are endless amounts of lives that can be saved!