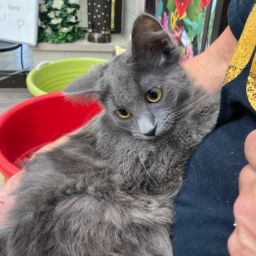 This was a picture of Miracle in a volunteers lap when he was awaiting his forever home at the shelter.

Everyone loves a feel good adoption story, and that is just what we have for you below! Miracle came to our shelter on September 5th after being seized in a humane case. He was a young adult cat with beautiful long gray fur, but something wasn’t right with Miracle’s back legs. Upon further examination by our medical staff, we learned that he was missing a back paw and his other back leg was not fully developed, which gave the appearance of a chicken wing. We believe he was born this way and despite his disability, was still able to live a normal, happy life. Miracle was a typical young adult cat, eager to play and spend time with volunteers. It didn’t take him long to open up and show his true self to the staff and volunteers that cared for him every day. We knew we had to find a special adopter for this special cat. Miracle, now known as Maverick, was adopted by former Board Member and President Deb. And so this adoption story begins:

“We lost our first cat Mellow, who was adopted 10 years ago from FAPL, to cancer in April. He was the most loveable unique cat you could ever meet. We never thought we would get another cat because we already have three more from FAPL. Two of which, Misty and Max, have special needs and our third cat is Mya.

I saw a post made by one of the staff at Friendship, Katie, who described Miracle’s story. While we were not in the market for a new cat,when we saw Katie’s post we were drawn to this little gray guy. Plus he had a name beginning with M……which fits right in. He has some personality similarities to our cat Mellow.. who we miss every day and will never be replaced. I wonder if he was sent to us from our cat Mellow in heaven. Was Mellow trying to tell us from afar that we needed to help this little kitty? I don’t know. I have read a lot of books about signs from pets in the afterlife. I feel Mellow is now watching over Miracle/Maverick. Whatever it was that drew us to him, we eventually decided to visit Miracle at the shelter.

Having a special needs cat was not something new to us. We have a tripod, Misty from FAPL, who is now 8, we have a cat, Max from FAPL, that was thrown from a car who had back and leg issues and he is now 6. Our third cat, Mya– well she is the sweetest and just a normal cat. No issues. 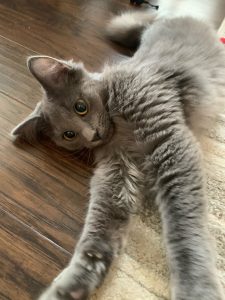 Miracle stretching and relaxing, knowing he is out of the shelter and in a home!

My husband Jerry and I visited Miracle twice and asked Katie a lot of questions. We also saw volunteer Marsha in the room with him and how he interacted with her. He was so sweet and just wanted to be held. We decided he needed to leave the shelter to give him an opportunity for a better life. Currently Miracle seems to have adapted to his surroundings and overcome his challenges. He loves to sit with us and cuddle and also play and explore.

We changed his name because I love Tom Cruise and Maverick was a big hit this year…not to mention he needed a strong ‘M’ name in our house.

When people want to adopt from a shelter they overlook the handicap animals and the ones who have issues, which is really sad because they do make great pets. Some people may not want to spend the time or money that it takes to care for a special needs animal. They are capable of so much love if given the chance. To us we just see a loving animal who needs a home that someone else may not provide. We have a quiet home and the ability to provide him with a loving home and access to the care he needs and of course all the toys and food and freedom he wants.”

After spending some weeks with Deb, let’s hear how he has been doing!:

“From the time he got to our house Maverick sure has gotten a lay of the land fast. He is a persistent little guy. Very persistent. He only stayed in the playpen for two days and then decided he wanted to be an explorer of anything and everything. He’s figured out how to get up and down steps and climb a large cat tree all with only two front legs. He doesn’t let that stop him. I don’t think he knows any different. He gets around very well. Plus we have all hardwood floors so it’s a lot easier than carpet for him. I noticed in the basement where we have carpet he uses the back stump he has more. He can’t slide around on it. 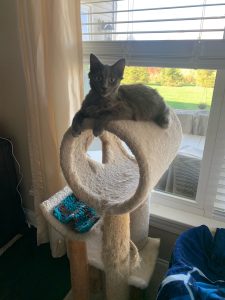 Maverick showing off the fact that his disability doesn’t stop him!

He is a great mouser. Loves to play and keep himself entertained. He found the ball tower and loves that too. He is also a big cuddle bug but right now he has a case of the zoomies. Lol. He figured out right away he has cat mates and he is trying to make friends but they are still not so sure. We still have some hissing and growling but nothing else yet. He goes right up to the others anyway. No fear. I am probably guessing that he had cat friends where he was and he can’t figure out why these three are not his friends yet.

Maverick has discovered that he loves wet food. Sheba and Rachel Ray are his favorite right now.  We have an orthopedic vet appointment in a week to look at that bone sticking out on the left that he doesn’t use. Considering his crappy first few months of life he seems adjusted and he is doing very well in his new environment. There are so many toys and play rooms here.  Plus it’s quiet, which has to be a big change from his previous living conditions.”

Maverick and his story is a prime example of cats having nine lives. He was born an outcast but has overcome this disability and is now thriving in his new home. This is why we think it is so important to give special needs animals a chance. They are all adoptable and capable of living normal lives, when given a chance.