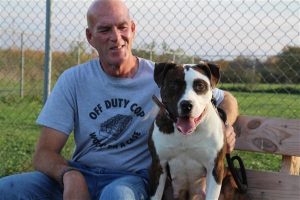 It was with great pride that I was able to present “Doc” Rick Broz with the 2016 Friendship APL Volunteer of the Year plaque. His love of dogs has been a true inspiration to so many, and I have been proud to work alongside him over the past 5 years. 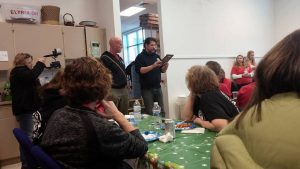 “Doc” Rick accepts his award for volunteer of the year!

”Doc” Rick Broz has been volunteering with Friendship Animal Protective League for the past 5 years. His contributions to both our shelter and to animals throughout Lorain County have been immense. His time with Herbie propelled him from shelter volunteer to animal hero. As an advocate for animals, he led the charge to pass legislation in the City of Lorain. This new law will prevent dogs from being tethered outside for the entirety of their lives.  He has become a friend and a source of inspiration to both the two-legged and four-legged, and we are proud to have him as a volunteer!”

Thank you Rick for the thousands of hours you have dedicated to both Friendship Animal Protective League and to companion animals throughout the City of Lorain!